Home Santiago’s Way Where does the way end?

Where does the way end?

Answer that may seem obvious to many of you: Camino de Santiago, it can only end in the city of Santiago de Compostela, but no. Numerous pilgrims, myself included, went further to be able to admire the Atlantic Ocean from the extreme promontory of Fisterra, or they ended their journey at the sanctuary of Nosa Señora da Barca, in Muxía, on the Coast of Death. Finisterre (Fisterra, in galego) is a Spanish municipality located in the autonomous community of Galicia whose name derives from the Latin expression Finis terrae, meaning “border of the land” as Cape Fisterra is one of the westernmost points of Spain (the primacy it is up to Cabo da Nave and to Cape Touriñán near Muxía). It was considered a mystical and symbolic place and it is said that the disciples of St. James passed through here to reach the place of the tomb. The custom of collecting a shell on the splendid beach of Langosteira soon became valid as a testimony to the pilgrimage carried out, which soon became the very symbol of the pilgrimage to Santiago. It is about a hundred kilometers from the city of Santiago de Compostela and tradition has it that pilgrims here take a bath in the ocean as a sign of purification, burn a garment worn during the journey itself and finally collect one of the shells, the Concha, (one of the symbols that marks the way) found on the beach as proof of the pilgrimage. At the lighthouse there is the stone with the “Kilometro zero” of the Camino de Santiago, a symbolic place and much photographed by tourists and pilgrims, as well as the cross on the sea where it is customary to leave a stone as a reminder of the passage. 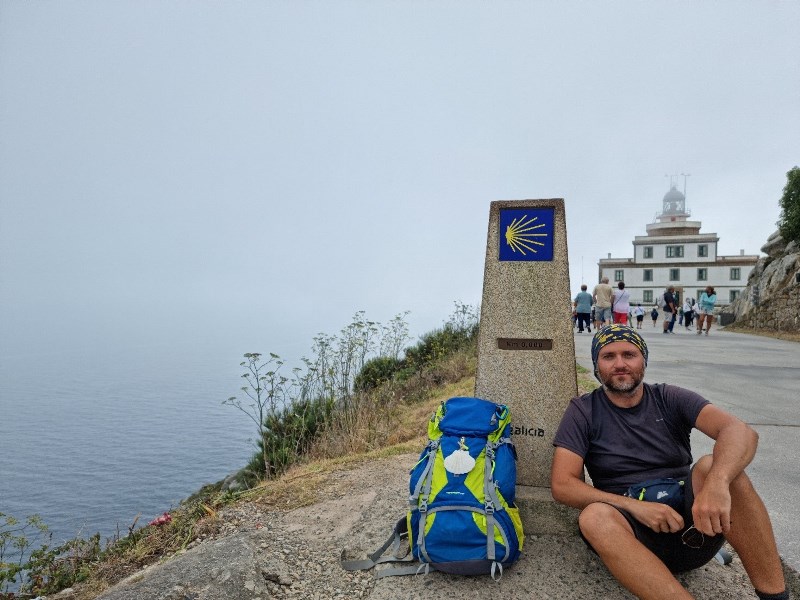 In addition to Finisterre, pilgrims now go to Muxia, adding a day to their journey. According to tradition, the Virgin arrived in Muxia on a stone ship to encourage the apostle James to carry out his preaching in the Iberian Peninsula. The “piedras santas” around the sanctuary would be the remains of the boat. An image of the Virgin was found near one of these stones and brought to the Muxia church. From here it disappeared to be found again on the rock. The decision was then made to build a sanctuary right on the cliff. The route from Santiago de Compostela to Finisterre is 86 km long. If you want to get to Muxia it extends by another 33. In Finisterre and Muxia you can ask for the “Fisterrana” and the “Muxiana”, certificates of the two goals reached, equivalent to Compostela.

To deepen the subject, to find out more and if you too have decided to walk the Camino de Santiago or dream of wanting to do it sooner or later, I suggest you buy my book where you will find out why every year, 300,000 people from all over the world, they decide to tackle the most famous Way in the world. If you too, like me, have always dreamed of giving up everything, aware that the life you lead is not the one you dreamed of as a boy, perhaps my experience could give you the courage that I lacked for 36 years …

Reading my experience, you will discover in detail and above all proven in the “field”:

…. “I gave up everything, I left home, sold my car, motorcycle, clothes, my rolex and most of the material things I owned to follow that almost nagging, suffocating, undeterred feeling that once known does not make you find peace: SANTIAGO, the Camino de Santiago. My life needed answers that only a journey in complete solitude could give me “….

I dropped everything to do Santiago’s way, Cesare Deserto’s book