There are many rites and symbols linked to this Way. To get to know them all, I invite you to read my book where I have dedicated a separate chapter to the history and meaning of each one. I will tell you about the most famous ones starting with the rites to do once you reach the cathedral of Santiago de Compostela:
1) Hug to the Saint. Above the altar of the Cathedral there is the sepulcher and the large statue of St. James covered with a silver foil. Behind the altar, on the left, there is a ladder that allows access to the back of the statue: from there you go down other steps on the other side of the altar. It is tradition to embrace the statue while whispering in his ear the ancient medieval phrase “Recommend me to God, my friend”;
2) Put your hand in the imprint placed in the central column of the Portico della Gloria, under the image of St. James. It is a gesture made to remind the Saint of the reasons, the commitments, the promises that prompted you to make the journey to his tomb;
3) Put your hand in the mouth of the monsters that are under the same column. We do not know why this rite takes place, but many do it;
4) The saint of bumps. It is customary to give three blows on the statue of the “saint of the bumps” (as it is traditionally called) which is located on the other side of the central column of the Portico della Gloria. The tradition tells that Mastro Matteo depicted his own image in the Portico della Gloria among the saved souls who accompany the apostle and the 24 elders; for this the bishop accused him of pride. He then represented himself on his knees asking forgiveness from God for his pride. Giving the three blows has the purpose of bearing witness to Mastro Matteo for the skill that allowed him to do this extraordinary work and for the humility that allowed him to publicly ask for forgiveness;
5) Touch King David’s feet. If you have arrived on foot in Santiago, when you enter the door of the Plaza de Platerias you must touch the feet of King David (one of the oldest figures in the Cathedral that is seen entering on the left) who plays the zither, asking him that your feet allow you to come back again.
THE RITE OF DRESSING
On departure the rite of dressing was performed with the delivery of the stick and the saddlebag:<< Receive this saddlebag, which will be the dress of your pilgrimage so that, dressed in the best way, you will be worthy to arrive at the door of San Giacomo where you have wished to arrive and, once your journey has been completed, you will return to us safe and sound and with great joy, if so will God who lives and reigns forever and ever>>. Upon departure, the pilgrim stripped of his possessions and often had to sell or mortgage the assets in order to finance the journey. He made his will and gave provisions for the management of the estate in his absence. Often the Church actively intervened in this function of protection. This peculiar state gave the pilgrim a particular prestige.
THE SHELL. Over the centuries, the pilgrim has always collected a shell on the beach of Finisterre, which had to be sewn onto the mantle or hat and was an indication or symbol of having reached and visited the tomb of St. James in the distant Galician region. It also served as a certificate to show to the appropriate authorities once they returned to their hometown or hometown to get exemptions from taxes or tolls on the return journey. Today in modern pilgrimages, the shells of St. James can be found and bought along the entire stretch of the path and are proudly displayed on modern backpacks as a testimony of the modern sacrifice along the entire stretch of the pilgrimage.
EL BORDON. The pilgrim’s stick was given to the pilgrim at the beginning of his journey with this blessing:
“Receive this staff as a support to the march and work, for the journey of your pilgrimage, so that you can overcome the traps of the enemy and arrive safely at the foot of Santiago, and after all the journey, return together with joy, with the comfort of God, who lives and reigns forever and ever. Amen”
El Bordón as well as being useful for chasing away animals, it had a mystical meaning because it represented the pilgrim’s third support foot, and had to remind him at all times of faith in God, in whose devotion he had to continue his journey.
LA CALABAZA. A particular type of gourd that served as a container of water or wine for the pilgrim, usually linked to Bordón. This also appears in the silver statue of Santiago donated by Johannes de Roucel in 1426 to the city’s cathedral.
THE CROSS OF SANTIAGO. It is the symbol that is often recognized on the shells of the journey and that in ancient times was sewn on the pilgrim’s cloak. It represents the Order of Santiago and is a red Latin cross that looks like a sword with the point down. The handle represents the immaculate honor of the morality of St. James and the sword represents his chivalrous character and his martyrdom, the sword being the means of his beheading. 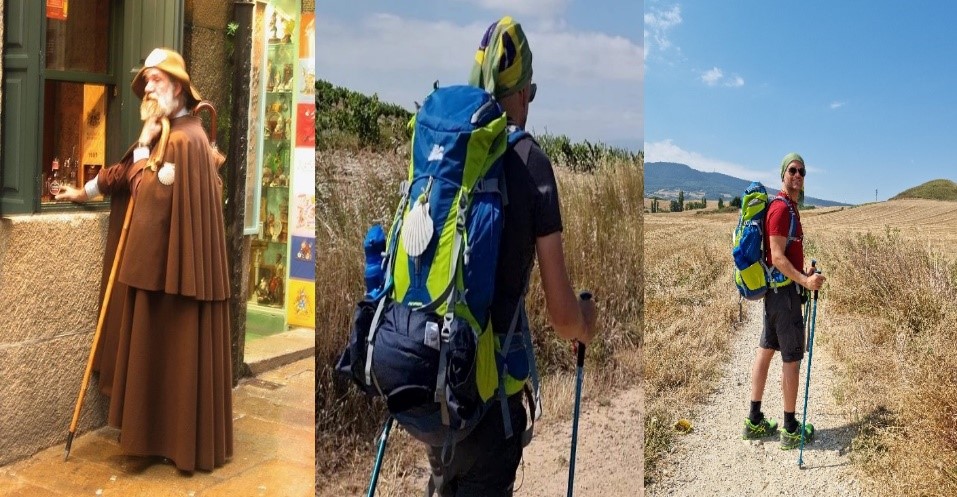 To deepen the subject, to find out more and if you too have decided to walk the Camino de Santiago or dream of wanting to do it sooner or later, I suggest you buy my book where you will find out why every year, 300,000 people from all over the world, they decide to tackle the most famous Way in the world. If you too, like me, have always dreamed of giving up everything, aware that the life you lead is not the one you dreamed of as a boy, perhaps my experience could give you the courage that I lacked for 35 years …

Reading my experience, you will discover in detail and above all proven in the “field”:
• the history of the journey (historical notes, symbols and legends) and symbolic places;
• suitable clothing and shoes, which backpack to buy and above all what to put inside;
• duration and distance of the journey, how many days it takes to complete it and where to start based on the days available;
• how to train before leaving and the necessary physical preparation;
• how much does it cost to walk the path, where to eat and sleep along the path;
• whether walking the path alone can be dangerous for a woman and whether there is a possibility of getting lost;
• the answer to many questions and concerns (which were also mine) posed by many aspiring pilgrims and the possibility of contacting me to dispel all your doubts / hesitations;
• finally, I will tell you why a journalist and radio host gave up his whole life of comfort and materiality, to travel more than 900 km on foot from the Pyrenees to the Atlantic Ocean, alone and without a telephone, sleeping over that in the various hostels also on the street, in a stable, in a tent, in an abandoned monastery and living two days in a hippie community.

…. ” I gave up everything, I left home, sold my car, motorcycle, clothes, my rolex and most of the material things I owned to follow that almost nagging, suffocating, undeterred feeling that once known does not make you find peace: SANTIAGO, the Camino de Santiago. My life needed answers that only a journey in complete solitude could give me “….

I dropped everything to do Santiago’s way, Cesare Deserto’s book